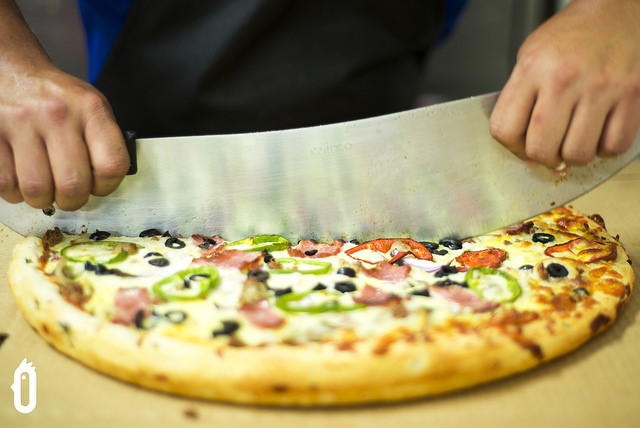 At home you can do delicious pizza 1, all the dough material into the bread machine, two or three times to appear thin film.
2, fermented to twice as large.
3, the fermentation of good dough exhaust, the average divided into 3 and wake up ten minutes.
4, Has been awake of dough roll into a round,about the same size with 8-inch baking pan, the middle part of the hole.
5, baked pan butter.
6, pizza skin put into the baking pan, use your hands pressure it, the pizza and baking pan fully close to the baking pan, then the second fermentation.
7, once not used up pizza skin can roll and garish, into the refrigerator frozen to save.

1, pizza dough generally with medium gluten flour or high gluten flour.
2, according to changes in weather to decide the amount of yeast.
3, a fermentation to be in place. After the operation of the time, do not like the same as the Secretary for how long fermentation, you can relax after the direct operation.
4, making pizza’s bread is thin, so you can put the top of the oven to bake.
5, in order to make pizza easier to achieve the effect of color, the first to be baked together with the baking tray.
6, when the shape into a cake, you can use hand pull, you can also use the rolling surface stick. But I like to pull the edge thinner by hand, the middle of thin points. Because the dough has a tendon, so do not have to pull into a large round cake, you can slowly pull. Wake up a moment will more good pull.